Spring Cleaning: Why My Wedding Bouquet Was The First To Go 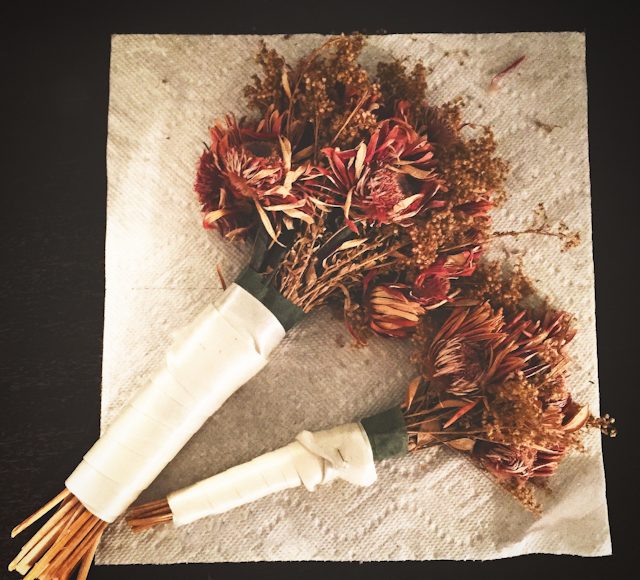 I remember the day my husband and I looked at our house for the first time with our realtor.

I was just five steps through the front door and I knew it was ours.

It was way more space (and money) than I was prepared for as a kid just two years out of college, but I couldn’t deny the feeling I had when I was within its walls.  I could see our future children playing in the living room. I could smell the family dinners in the kitchen. I could hear the cheers in the basement from the parties held there for the big games.  I could feel the fun to be had at our backyard barbecues.

While the emotional side of me was on board to throw the offer down, my logical voice kept screaming, “It’s too much SPACE!! What are we going to do with all of this SPACE?!”

Ten years, three kids and countless memories later… I assure you we’ve come up with an answer.   Two kids are bunked.  The baby’s nursery is also the guest room. Boxes are on top of each other in storage. Corners are utilized for things that don’t have a place or for clean laundry that no one wants to fold.  Bins of keepsake things are collecting dust in closets.  Drawers are stuffed with randomness that no one has time to go through.  Toys are in bins wherever bins shall fit.

The question is no longer about what we will do with all of the space.

Instead, I’ve been asking myself how I can get some of it back.

It seems as though with every car seat we’ve brought home from the hospital, and every year we live under this roof, a flood of “stuff” enters our space. Some of it is just that… stuff.

Stuff that doesn’t have a place or purpose… but just doesn’t feel like it should be thrown away either.

But some of it falls into the sentimental category.  I’m one of those “tie emotion and memories to things” kind of girls and I save things that are associated with times that meant something.

Brochures from my honeymoon.  High school sports t-shirts.  Tickets from big sporting events. Toys that the kids don’t play with anymore but someone special bought for them. COUNTLESS amounts of 4×6 pictures in shoe boxes.

But how much sense does it make when those sentimental THINGS associated with past memories… become thieves robbing you of making new ones?

It’s time I SHOULD be spending creating new moments. But instead, I am too buried in the “things” associated with old ones.

One of those sentimental things I’ve hung on to is the bouquet of flowers I carried on my wedding day.

I’ve had intentions of doing something cool with it. Shadow-boxing it.  Or maybe just simply keeping it to hand down to one of my girls as a neat family heirloom.

Instead, for the last ten years it has sat on the top of my dresser on a paper towel.

Yes.  That super-sentimental item that means SO MUCH has been displayed beautifully on a paper towel platter in my bedroom.

I confess that I barely notice it in the midst of the loose change, hair brushes and kids toys that occupy the top of the dresser alongside of it.  But one day last week as I picked up a few of the dried petals that shed off the paper towel… it hit me.

I turned to my husband and said, “It’s time for these to go isn’t it?”

Without hesitation he professed what I already knew.

“It’s not the flowers that I remember from our wedding. It was you. And the awesome party we had with our family and friends.”

My keepsake from that day lies in my memory and our pictures.  And MOST IMPORTANTLY in the marriage that we have today and the beautiful family we have as a result of that.

A beautiful family with whom I’m missing out on moments because I’m so buried in tidying “things” that I’ve convinced myself are important to keep.

With that revelation in mind, my spring cleaning this year started with a bouquet of flowers laid to rest in a bathroom garbage can.

Because what I carry with me from that day is not tied to them.  It’s tied to the ring on my finger. The man at my side. The pictures that hang above our bed. The family that continues to support us.

Just like I don’t need a t-shirt to remember the friendships I made on the track and basketball court in high school…or a ticket to remind me of how much fun I had at that playoff game… Or a brochure to remind me of how beautiful it was to celebrate my new life with my best friend on our honeymoon.

Play in the living room. Dinners in the kitchen.  Cheers in the basement. Memories being made in the backyard.

The things that don’t require any space besides what’s within the chambers of the heart and the vault of my memory bank. 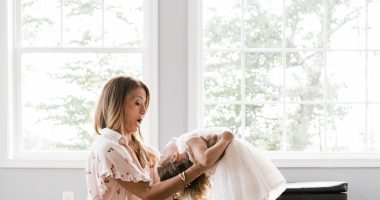 To My Baby, You Don’t Represent The Last Of Everything 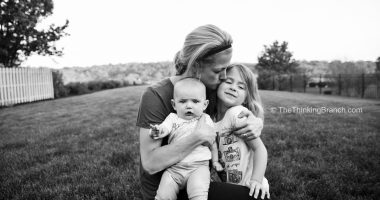 « Previous post
When Traveling with Young Kids, Don’t Forget to Pack Your Gratitude
Next post »
Shedding The Weight : Brick by Brick