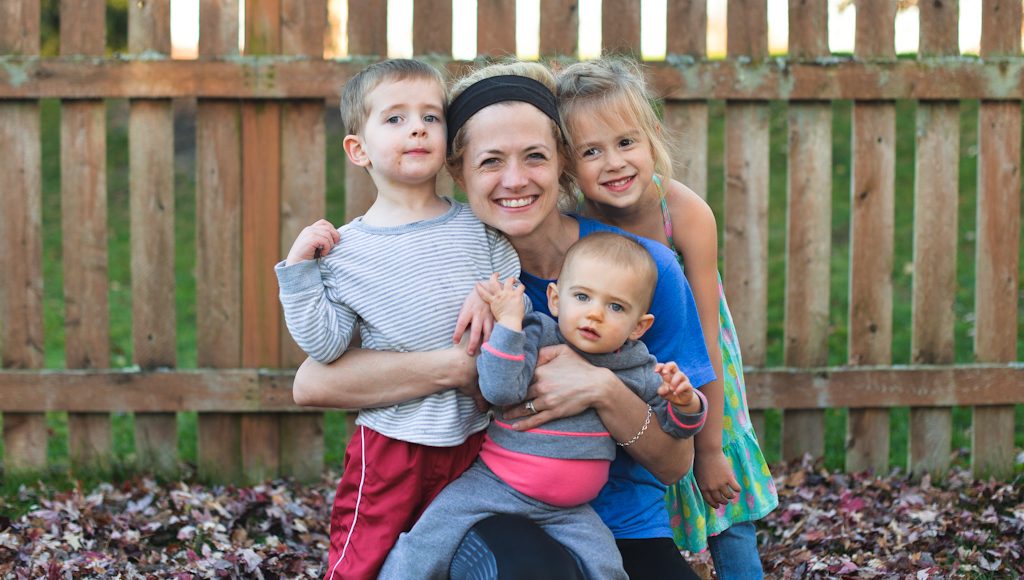 Right in the middle of my 10-month-old baby and 2- and 4-year old toddlers — flashing my smile after a warmer-than-normal fall afternoon playing in the leaves with my trio.

The problem is, I don’t remember any of it.

The only reason I can tell you that we were playing in the leaves that day is because the flanking image in my phone that shows my son and daughter mid-air about to land in the raked pile.

My memory would been fired if its job was to remember that day without that photographic prompt.

In fact, if its job was to remember MUCH of anything in that phase of parenting, it would have been given a box to clean up its things and turn in its badge before it even got the job.

But it’s not my memory’s fault.  It can’t work when its employer is making it hard to execute its duties.

Because at that time, I consistently kept my mind’s windows open to allow anxiety, stress, fear and the need to pursue perfection come flying in… not allowing me to be immersed in these daily moments with my kids because it was two busy fending off their constant buzzing of lies in my mind.

“You are failing miserably.”

“You’ll never be the mother that your mother was and is.”

“You will never keep up with your to do list.”

“You will never stop living in a constant state of anxiety over terrible things happening to your kids.”

“You will never figure out how to pursue your career, and even if you do, you’re not good enough and your kids will resent you.”

Yes, friends, I’d recognize that picture immediately if it was anxiety, stress and self-doubt that were pushing up against me with a lost look on my face.

That’s a hard thing to admit.

That’s a hard reality on which to reflect.

It’s not easy to know that I can’t go back live IN the moment instead of just trying to get through it.

It’s not easy to know there are other beautiful moments that happened — with a camera nowhere to be found — that I will never be able to recall because I was so overwhelmed.

It’s not easy wondering how much I missed.

But you know what?

I didn’t miss it, and this picture is proof. I was right there in the thick of it.

And maybe I wasn’t supposed to remember the day we jumped in the leaves, after all — but was instead supposed to be immersed in the season.

When I need to be reminded that Motherhood IS… a series of seasons.

Sometimes I’ll water the flowers, and some days I’ll feel caught in the storm.

But it’s always about living in whatever the season gives you… knowing its meant to serve you for the next one.