Where did I lose my “me” time?

When I was 7 or 8 years old… I had a “thinking tree” (as I called it) just down the alley that ran beside my house.  It had a thick branch just low enough that I could pull myself up to sit on it, and leaves that sagged down almost to ground level to create a natural little tent inside which no one could see me.

I loved that tree.  It was my “space” where I went simply because I enjoyed alone time… and it also served as a “safe zone” I could retreat to when I felt emotionally overloaded or sad.

Lately I’ve been noticing that my daughter has a WHOLE LOT of me coming out in her personality… specifically in the way that she also finds ways to make time to be by herself.  Whether it’s taking her stuffed animals into her cardboard “house” (made of the shipping remnants of our patio furniture we got this summer), and closing the door for a half hour while she plays make-believe with them…. Or how she’ll be playing with a group of neighborhood friends and then find a way to make space for herself to dance or to sing “Frozen” songs away from the crowd.

And watching her little “keep to herself” personality has brought me back to the peacefulness that I used to feel doing the same thing.   While I LOVED my time with my friends and spent the majority of my time with them…  I equally loved those quiet times just hanging out by myself.   Whether it was in my room journaling/writing poems… or just hanging out on that low-hanging branch.

But somewhere along the way… that little girl stopped going to that thinking tree.  She stopped giving herself a time and a space to retreat to when her emotions were on overload, or just to be alone with her thoughts.   And today… if I DO decide to spend that time alone…  it’s uncomfortable, can be filled with guilt that I should be doing something “productive” or with my family… and simply just not as peaceful as I remembered it being on that branch.

So WHY did that little girl lose that awesome recognition that “me” time is so important…so healthy … and so necessary to stay level-headed in an otherwise uneven world?

I know I lost it a little bit in adolescence when I got made fun of for being “too deep” and started trying to hide that side of myself.

I know I lost it a little bit in my twenties when I spent my time defining myself based on how many friends I had around me.

I know I lost it a little bit when I entered the corporate world and got caught up in the belief that time spent on emails/meetings/deadlines were more important than time spent acknowledging what my own needs were.

I know I lost it a little bit when I had kids and listened to the societal voices that labeled Moms who openly admit that they want “me time” as selfish.

But looking back… I realize that I didn’t lose it. I gave it away, didn’t I?  I gave it away to the chaos and to all of those other voices.  I spent more time listening to that noise, and NOT listening to the person that I used to listen to when I sat on that thinking tree branch 25 years ago.

There are times that I watch my daughter retreat by herself and worry for her…  that she might be an outcast at school when she’s off in the corner of the playground by herself while all of her classmates are playing kickball.  But you know what? I hope she doesn’t listen to me – or anyone who calls her out for it, for that matter –  and instead…. that she never stops listening to that smart little voice of hers that tells her how awesome it is… and always will be… to give herself some “me time.”

And I hope she’ll let me borrow her thinking tree … whenever I decide to start listening again to the voice that really matters. 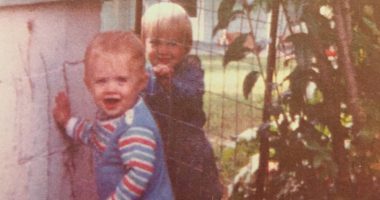 Why Lifelong Friendships Are About Meeting At The Fence 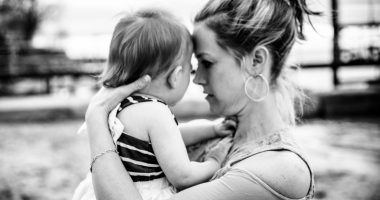 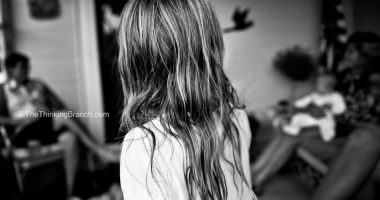 Because One Day She Will Have To Walk Away